Liverpool are set to be without midfield linchpin Fabinho for up to eight weeks, leaving the key question of how the midfield should now shape up.

Liverpool’s fears over the Brazilian’s injury were confirmed on Friday as he is set to sit on the sidelines through the Reds’ relentless festive fixture list.

After being withdrawn with less than 20 minutes on the clock against Napoli in midweek after suffering ankle ligament damage, Fabinho is expected to miss at least 10 games – and could then miss up to four more after the new year.

It leaves Jurgen Klopp with a solution to find and a decision to make, whether that be a change in personnel or formation.

Liverpool’s No. 3 has been a mainstay in the middle of the park thus far, playing 18 of a possible 21 games, and while he was to miss Brighton’s visit through suspension, thoughts have quickly moved to how the Reds will handle his absence. 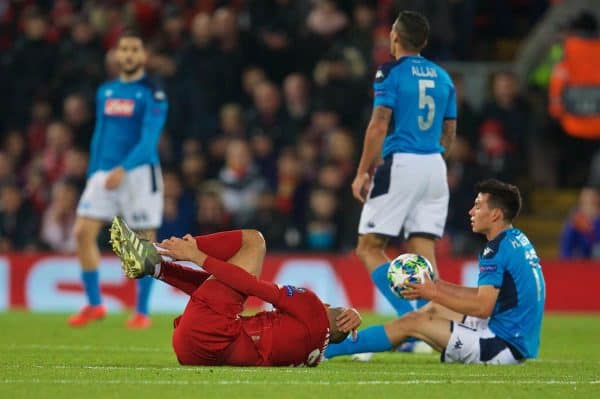 The likes of James Milner, Naby Keita, Alex Oxlade-Chamberlain and Xherdan Shaqiri are all at Klopp’s disposal in the middle of the park ahead of the club’s congested schedule.

A direct replacement as the deepest midfielder, however, is likely to see Gini Wijnaldum, Jordan Henderson and Adam Lallana come to the fore, with the former occupying the position following the Brazilian’s early departure against Napoli.

And This Is Anfield posed the question to fans on Twitter and across the website of which of the trio should take Fabinho’s role as the holding midfielder in his absence. 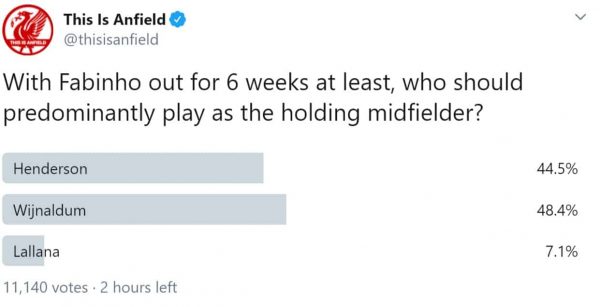 Of the 11,140 fans who cast their vote on Twitter, 48.4 percent were of the view that Wijnaldum was the man they would prefer to see predominantly play as the Reds’ holding midfielder.

The Dutchman narrowly edged out the skipper by less than four percent, where his success in the role throughout his time at the club was the key deciding factor for some fans.

@TheEgytianKop wrote: “Gini. Excellent in possession. Does not lose the ball under pressure and can retrieve the ball. He’s athletic and dynamic as well.”

For @zacharytbaker, he felt that Henderson is not as suited to the position as Liverpool’s No. 5, writing: “Henderson is not a competent 6. Gini is far and away the best backup to Fab in that role.”

While @NathanNorthcutt took the view that each player could fulfil the role, but Wijnaldum should be the man to get the nod in the ‘big games’.

“Think all of them can depending on the game. But against the tougher teams, Gini should be the man. Otherwise, we should play a 4-2-3-1,” he said.

It was a view similarly shared by @shornKOOMINS, who was in disagreement with only one point as he wrote: “Share it between Henderson and Gini imo. Both perfectly competent there. Lallana – God no.”

And some were not overly concerned over either Henderson or Wijnaldum occupying the position but voiced their eagerness to see Oxlade-Chamberlain and Keita also included in the midfield setup.

“The midfield should be Gini, Hendo, Ox. Not majorly fussed on who plays the number 6 role, however, I do think Hendo would be a little better suited as he has more experience there,” @LFCjus_ said.

“I’d like to see a midfield of Hendo/Wijnaldum, Keita and Ox,” @Pritch___ agreed.

Meanwhile, the results across the website were a lot more conclusive as of the 4295 fans who voted, 53.9 percent were in support of Wijnaldum being deployed as the holding midfielder.

“I voted Gini but I reckon he’s best served as somewhere between a 6 and 8. We need him to ease the pressure when we win possession. I feel Hendo isn’t shy to rotate the ball quickly and effectively enough for the 6,” Tbone187 said.

Similarly, Cole D’Biers was in support of Wijanldum settling back into a familiar position, but he was also confident in the depth of Liverpool’s squad to cover the position for the duration of Fabinho‘s injury.

“I’m confident in the depth of our current bench to step up when needed.

“Gini was doing well as a 6 last season before Fabinho integrated into EPL and can step back into the role I think.”

A view shared by Righteous Dude, who wrote: “Maybe this is time for Lallana to step up and contribute alongside Gini and Hendo.

“The opposition may not shake in their boots at Lallana’s name, but as another cog in Jurgen’s engine, together we will get through the next fixtures.”

While the timing of the injury itself is far from ideal, Liverpool have options at their disposal who have played a significant amount of games in his position throughout the years, ensuring an adjustment period is not needed amid a run of two games a week.

Although Wijnaldum edged both votes, the results and subsequent debate surrounding the decision shows the Reds are in a strong position to safely alter both personnel and formations throughout Fabinho‘s stint on the sidelines.