The last time West Ham won 8-0 was against Sunderland in October 1968, when a certain Sir Geoff Hurst helped himself to six goals at the Boleyn Ground.

On Wednesday night against Football League basement boys Macclesfield, it was academy kid Grady Diangana who stole the show, scoring the seventh and eighth in this Carabao Cup third-round trouncing.

As far as debuts go, this was one to remember from the 20-year-old attacker. West Ham will not enjoy an easier evening’s work at the London Stadium. 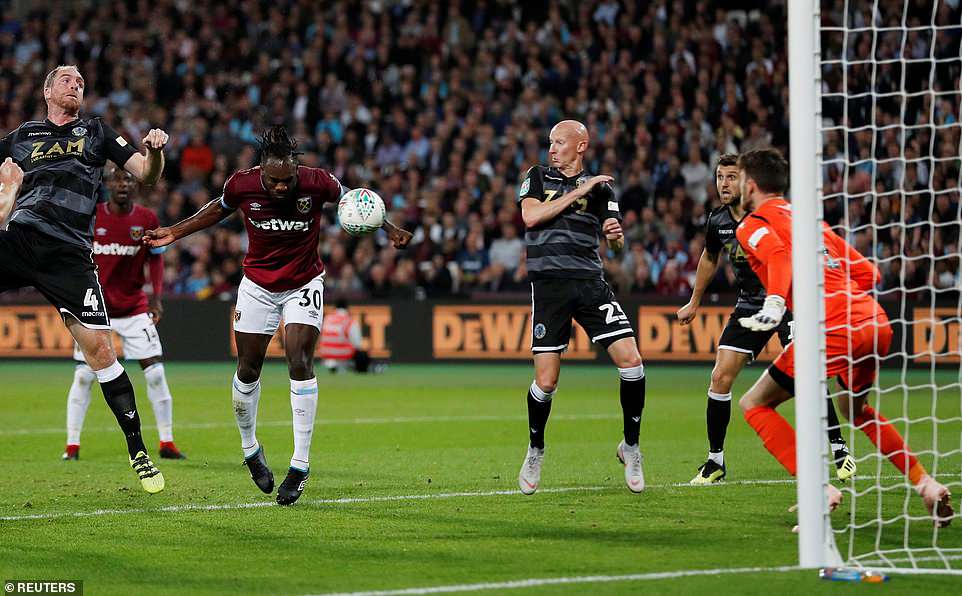 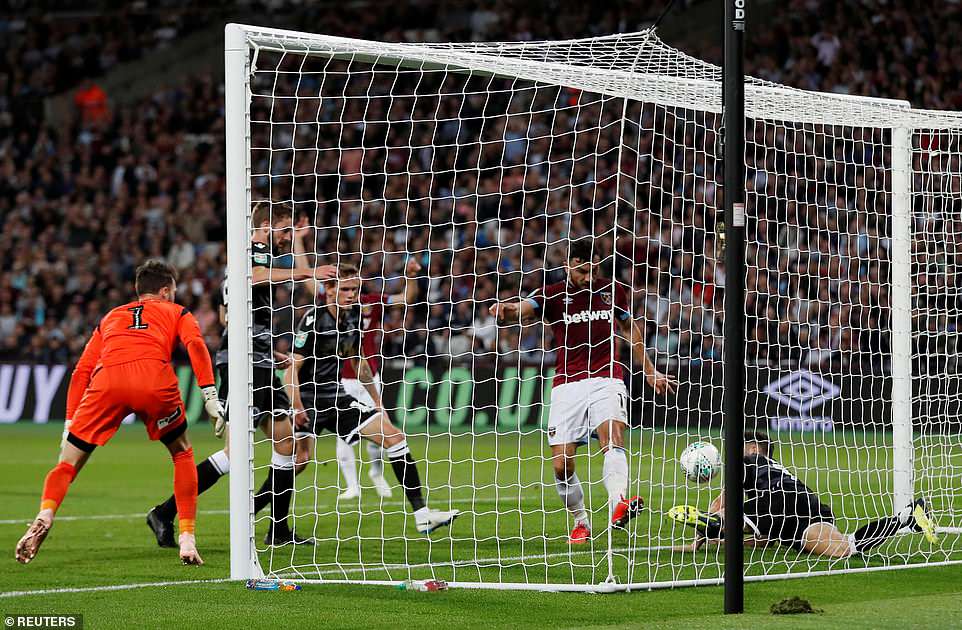 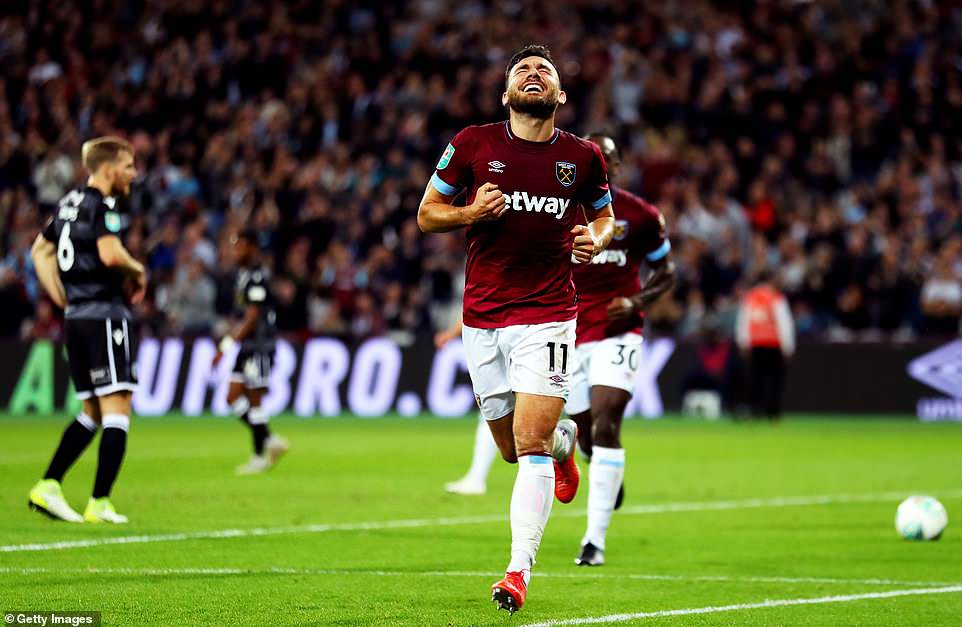 Having fought his way back into West Ham’s first team, Snodgrass enjoys his close-range strike in the Carabao Cup 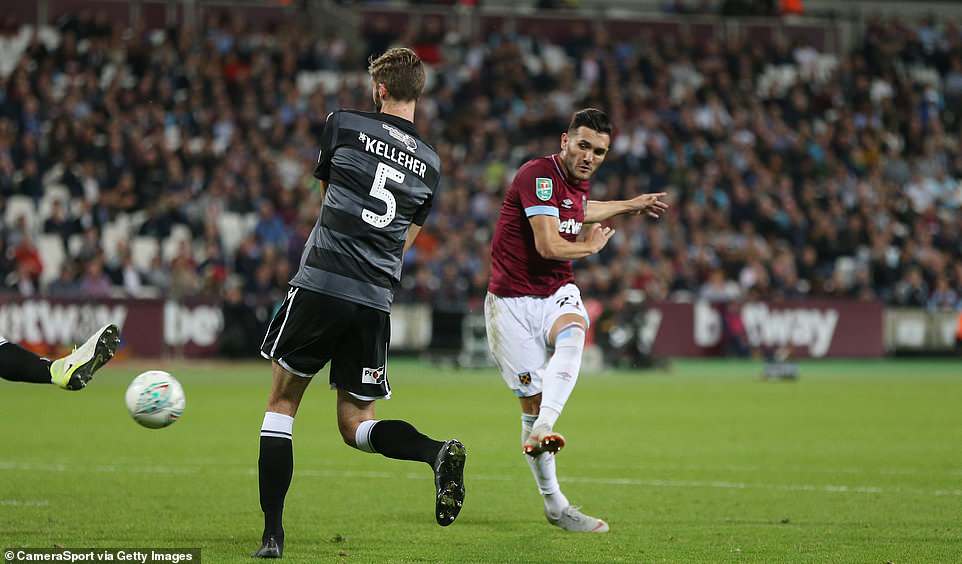 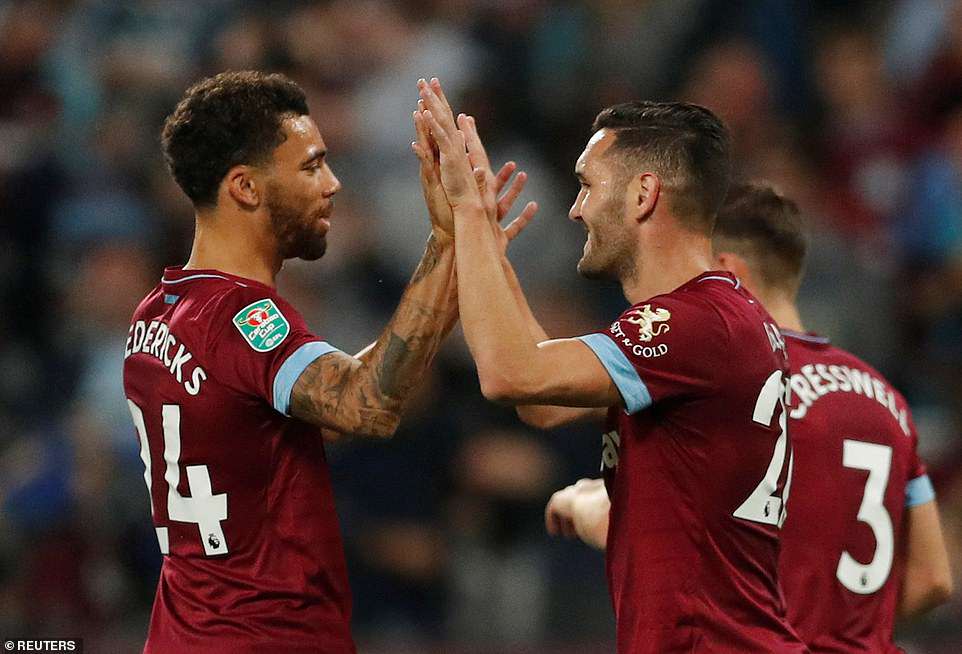 This ruthless rout also saw Robert Snodgrass grab his first goal for the Hammers, while Lucas Perez, Michail Antonio, Ryan Fredericks and Angelo Ogbonna got in on the act too.

This competition was the first and last that Manuel Pellegrini won with Manchester City. His priority is the Premier League, though the Chilean sees the Carabao Cup as a realistic chance for silverware.

Pellegrini’s players ran circles round Macclesfield, who sit rock bottom of League Two and are winless this season. As the away supporters, who made a seven-hour round trip to be in Stratford, sang: ‘You’re nothing special, we lose every week.’ Sometimes, if you don’t laugh, you cry.

‘The only thing I demand from young players when they have the opportunity is that they take it,’ Pellegrini said on Diangana. ‘He did very well, not only for the two goals.

‘I’ve seen him working on the training ground every day of the week – that’s why he played. 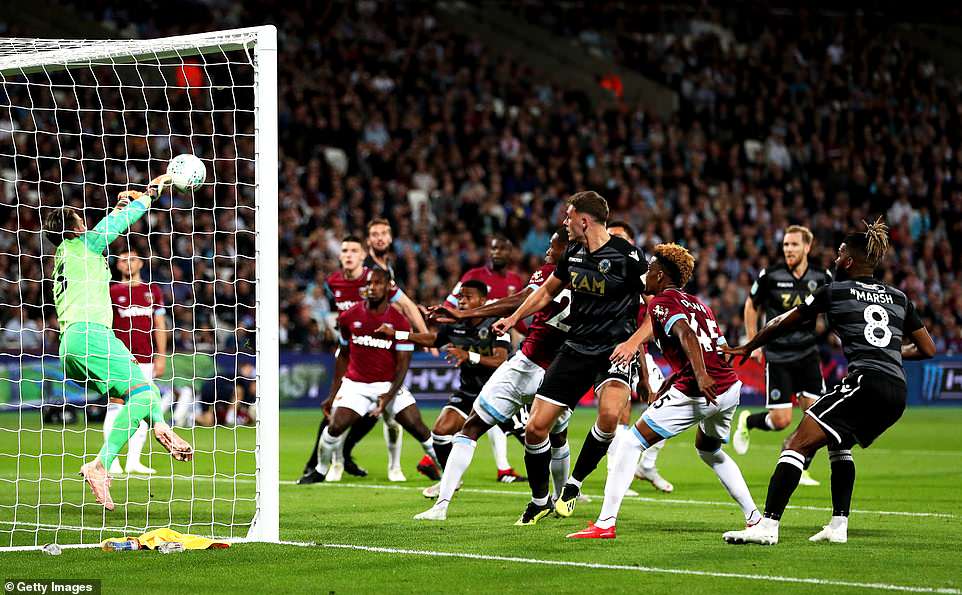 Harry Smith also gives Macclesfield a surprise lead, but is denied by the reflexes of Hammers’ keeper Adrian 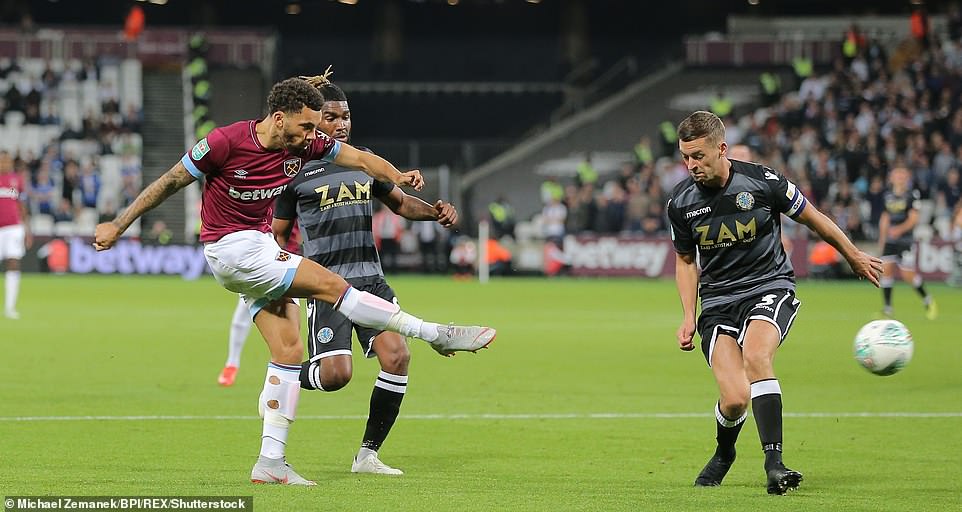 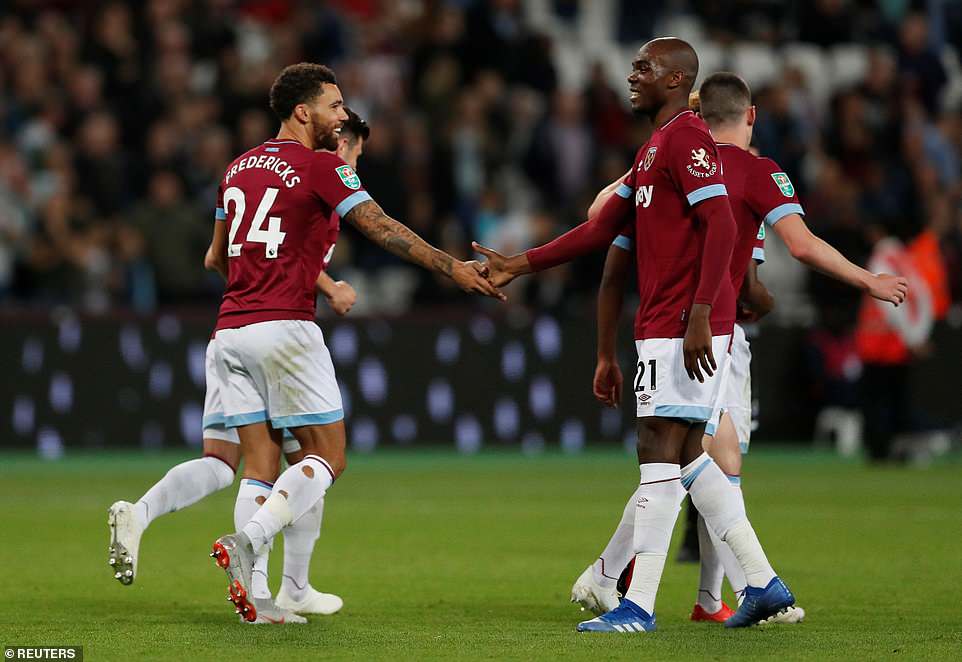 Fredericks shows he mimicks England right back Kyle Walker in more ways than one, with holes also cut into his socks 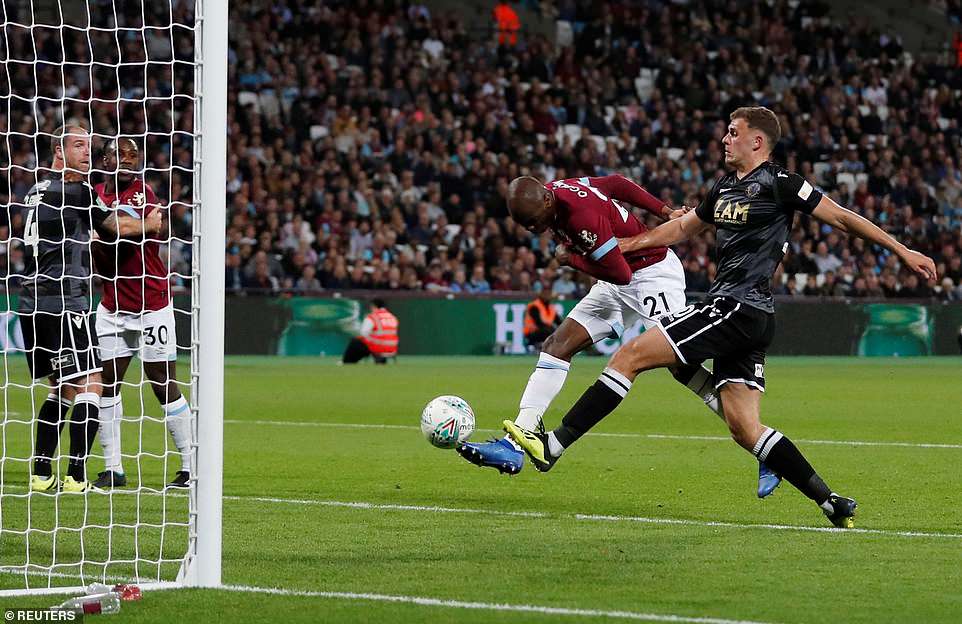 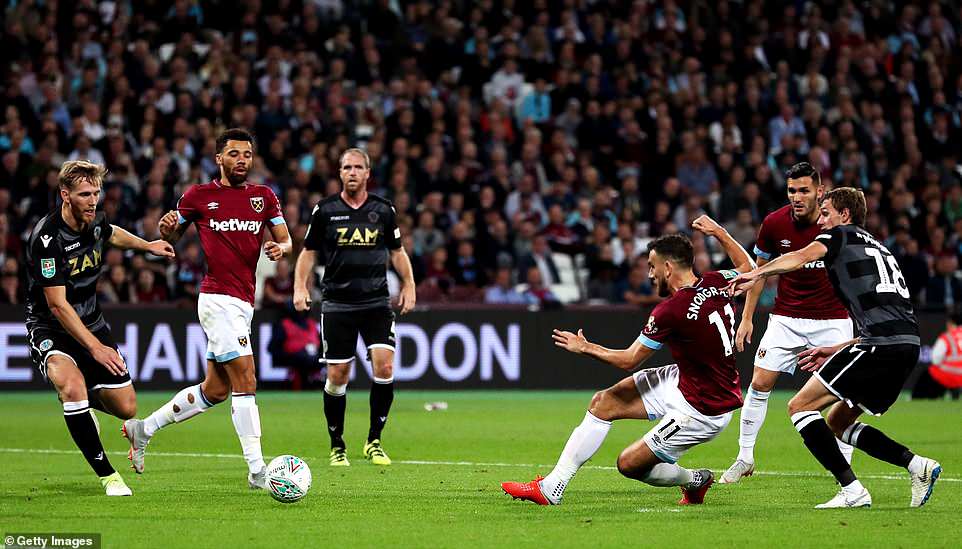 West Ham held the joint-record for the biggest win in this competition – a 10-0 victory over Bury in 1983. For Macclesfield’s sake, it was a good job Pellegrini rested a few of his familiar faces.

Within 10 minutes, the home side were forced into a change with Carlos Sanchez replaced by Declan Rice, the gifted midfielder caught up in a contract saga.

A loud roar greeted the 19-year-old’s introduction, with supporters keen to see him sign on the dotted line. West Ham will have to increase their offer of £12,000 a week if he is to do so.

The Hammers got the rout going in the 29th minute when a delicate cross by Rice was met by Antonio. Their second goal was sloppy as Diangana forced a save out of Kieran O’Hara then, amid a Macclesfield melee to clear the danger, Snodgrass scored a tap-in.

Snodgrass, who joined West Ham in January 2017 for £10.2million, and was once billed as Dimitri Payet’s replacement, finally had his first goal for the club.

It was made 3-0 when Perez volleyed the ball beyond O’Hara, then 4-0 after Fredericks emphatically found the far corner from a tight angle.

Before the hour mark, Ogbonna headed home from a corner to make it five and Snodgrass scored his second after a passing move.

Moments later Diangana drifted through Macclesfield’s back line and scored, though the youngster’s night was not over. He then made it 8-0, scoring his second with terrific composure.

O’Hara, once again, sheepishly picked the ball out of his goal. The final whistle was merciful for him and Macclesfield. 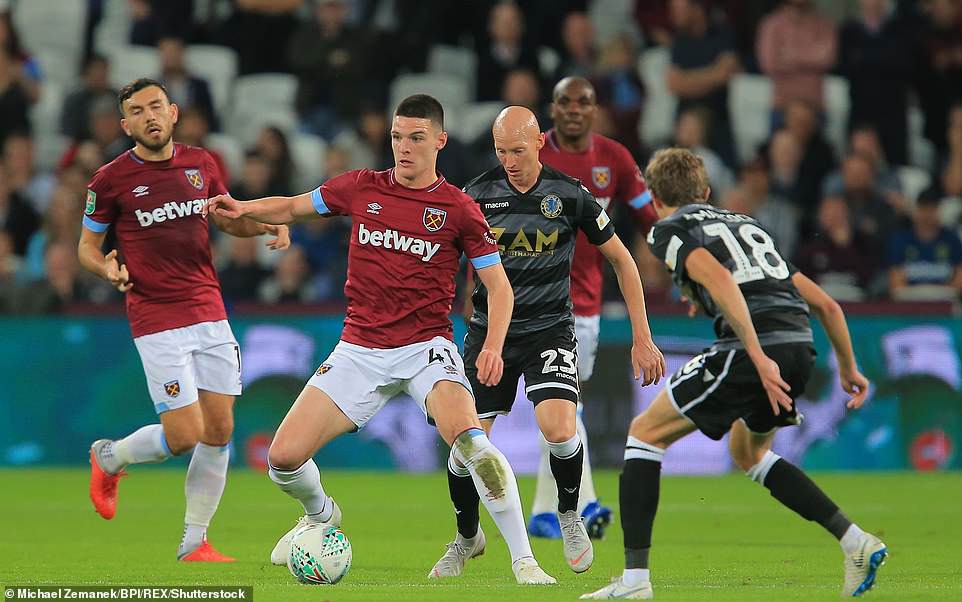 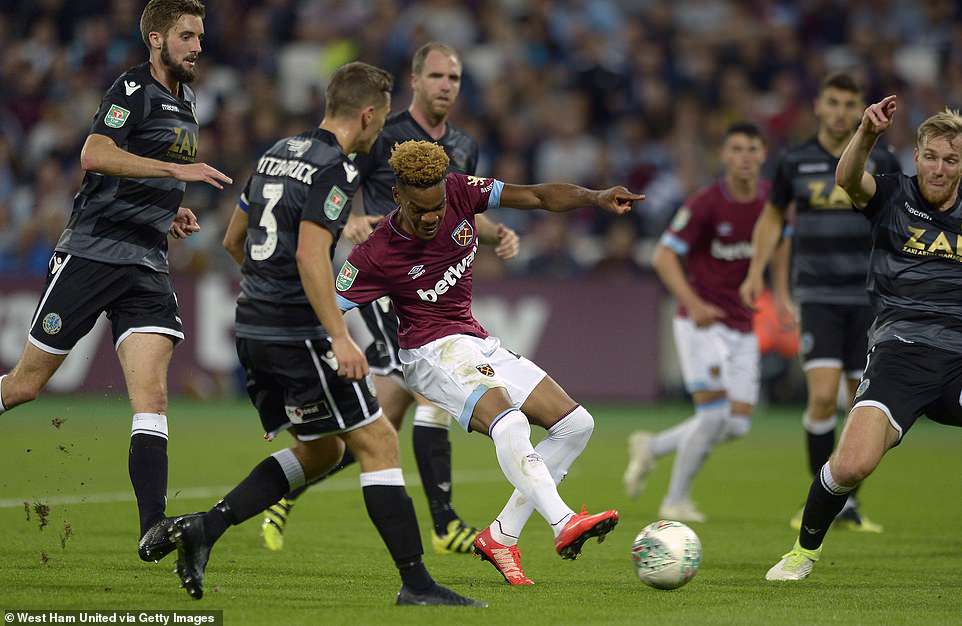 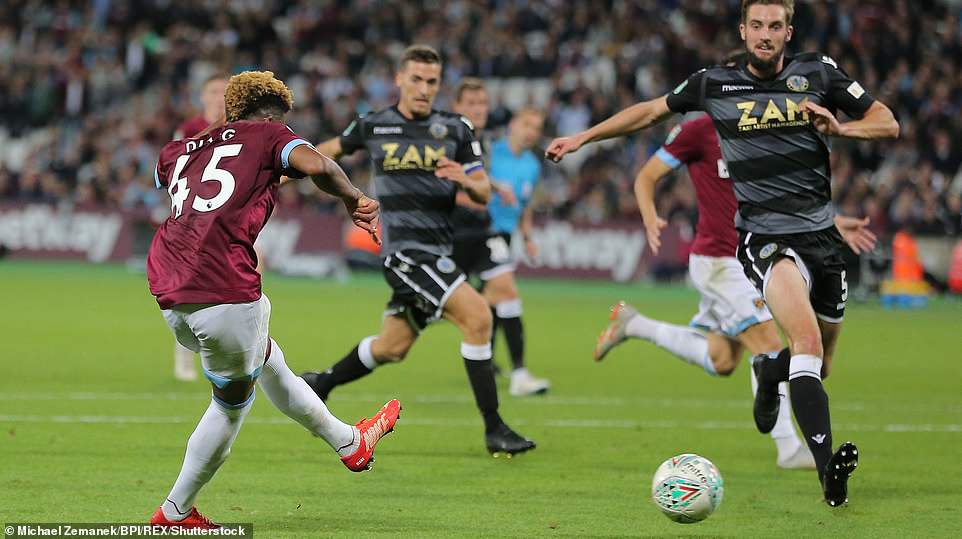 There was more to come from the 20-year-old, who steered in his second eight minutes before full-time 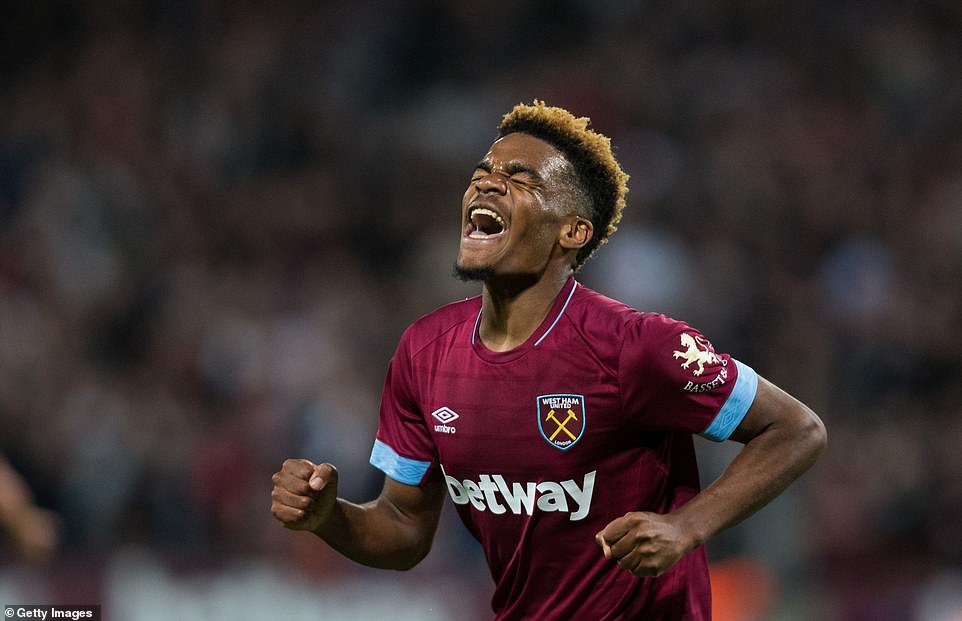 I picked up a knock but defeat hurts more – Marcelo