Pepijn Lijnders stepped in for Jurgen Klopp for the pre-match press conference ahead of Liverpool’s League Cup clash with Lincoln, proving good value on a number of topics.

The Reds head to Sincil Bank on Thursday night looking to progress to the fourth round of the League Cup, against a side who currently sit second in League One.

Lincoln have been in perfect form since the start of the campaign, with two wins in the league, one in the EFL Trophy and two in the League Cup, including a 5-0 thrashing of Bradford in the second round.

Lijnders is fully aware of their threat, and stressed that Liverpool need to be particularly wary of their ability on the counter-attack.

“It’s about finding a team who feels the responsibility to give everything tomorrow,” he said of Jurgen Klopp‘s team selection.

“And finding a good balance of this. I said already last year, in these competitions it’s a great moment where you can combine experience with talent, which makes each other stronger.

“Because are going to play against a side who will defend deep, who is ready to counter-attack, has real speed on the wings and real technical players on the inside, but set up for a good counter-attacking game.

“They’ve scored five already this season from counter-attacks, and at the same time, when they play they really play. 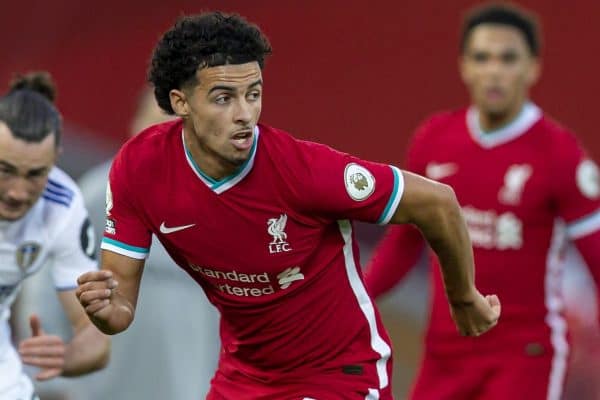 “What I’m trying to say is that the team we have to put into place tomorrow has to be a team who is very well-prepared, and if you have only three days between two games, you have to use the time very wisely.

“Sometimes it’s really interesting to prepare a team from day one after the last game, that’s what we try to do.”

Lijnders also spoke fondly of new signings of Diogo Jota and Thiago, along with young hopeful Billy Koumetio, who along with Jordan Henderson, Joe Gomez and Joel Matip should miss out on Thursday due to injury.

He gave little away on Rhian Brewster‘s future, and praised Fabinho for his performance at centre-back in Sunday’s 2-0 win at Chelsea.

Neither Fabinho or Brewster are expected to start at Sincil Bank, but as Lijnders stresses, Liverpool are looking to go strong in the League Cup, against a side they will make sure to show respect.

Who's going to make the playoffs? | MLS Weekend Preview pres. by AT&T 5G

Dishing out Alternative Awards for the 2020 MLS season | Andrew Wiebe