Liverpool were intent on doing things the hard way once again on May 13, 2006, in a final which saw Steven Gerrard inspire another almighty comeback in a game which is now named after him.

Millennium Stadium in Cardiff was the location. Liverpool and West Ham were the two teams. The FA Cup was the prize.

It was the 125th season of the world’s oldest football knockout competition, a showpiece which would forever be remembered as ‘The Gerrard Final’.

The Reds had progressed as a member of the final two by overcoming Luton, Portsmouth, Man United and Birmingham City, which set up a semi-final against familiar foes in Chelsea, with Luis Garcia scoring the all-important second goal to book Liverpool’s place in the final.

They would be joined by a West Ham side who finish the 2005/06 Premier League season in ninth place, 27 points behind Rafa Benitez’s side.

Liverpool had won the European Cup the year previous, with the game falling 12 days prior to the one-year anniversary of the miracle of Istanbul, leading many Reds to feel as though the club’s seventh FA Cup would easily be added to the cabinet by days end.

Pepe Reina, Sami Hyypia, Jamie Carragher, Xabi Alonso made up the spine of the side alongside Gerrard, with Djibril Cisse and Peter Crouch leading the line.

For the opposition, Alan Pardew was the man at the helm for the Hammers’ first FA Cup final appearance in 26 years.

“What the manager has done and the players as well have been nothing short of a miracle,” West Ham winger Matthew Etherington had assessed when they sealed their place in the final.

Everything pointed to Liverpool easing their way to lifting the trophy come the end of 90 minutes.

“We were favourites, a strange sensation…Everybody thought we would steamroller West Ham,” Gerrard wrote in his self entitled book, ‘My Story’.

The encounter was anything but.

It was a miserable start for the Reds. When the game ticked into the 21st minute West Ham found themselves in the lead thanks to an own goal from Jamie Carragher, with a finish a striker would have been proud of.

One became two seven minutes later when Etherington’s shot from the edge of the area was fumbled by Reina, providing the opening for Dean Ashton to slide the ball into the net.

With 28 minutes on the clock, Liverpool were two goals behind and the need to again dig themselves out of a self-inflicted hole and do things the hard way was clear for those of the Red persuasion.

Liverpool had previous of mounting successful comebacks and needed only to cast their eye back to their triumphant European campaign the year prior – and as he did back then, Gerrard proved to be the man to inspire a memorable comeback.

“Time for another great escape,” was how the captain put it.

And Liverpool’s inspirational skipper had his team back within striking distance moments later with a sumptuous defence-splitting ball over to Cisse who found the goal at the first time of asking.

By the time half-time rolled around, Crouch had the ball in the net only for it to be ruled offside while Ashton was agonisingly close to restoring West Ham’s two-goal buffer in what was a relentless opening 45 minutes.

And the high tempo, rollercoaster ride continued into the second half with Gerrard emphatically securing the equaliser in the 54th minute to send the travelling Kop into euphoria.

It would last just 12 minutes, however, as the Reds fell victim to a Paul Konchesky cross which floated into the top corner as Reina was once against caught out to leave Liverpool with everything to do, again.

And Gerrard would be the answer, again. Despite being on his last legs as cramp took over his body, the Liverpool skipper’s embodiment of pushing until the final whistle proved decisive as he dragged his side back from the brink and snatched victory away from West Ham in stoppage time. 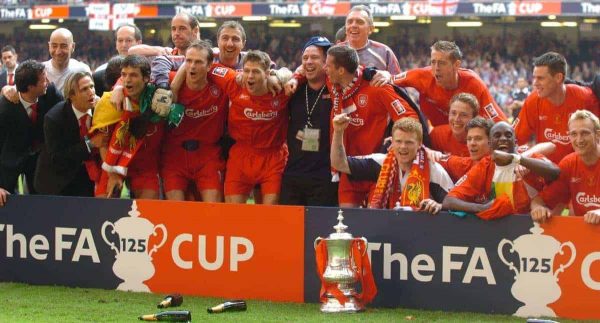 From 30 yards out Gerrard had unleashed a thunderous effort into the bottom corner. It was 3-3 and captain fantastic had done it again with the sweetest strike you’d ever see.

Both teams survived to send the game to penalties and at that point pre-game premonitions finally felt as though they would come to fruition.

Benitez’s men would win 3-1, with Gerrard scoring the second as Reina made up for his errors in regulation time by saving three of the Hammers’ efforts.

After the game, Gerrard was rightly heralded, labelled “irrepressible” by the press on a day where “it was his sheer strength of will that single-handedly dragged Liverpool from the dead.”

“The 125th FA Cup final was called the greatest ever, even ‘The Gerrard Final’! That meant the world to me.”

* This is part of a new series aimed at filling the void without football, looking at the greatest moments in the history of the Reds. We’ll be publishing new stories from Liverpool’s glorious past each day at 7am and 7pm (UK).

Liverpool, criticism and why football clubs are held to different standards