A tantalising Merseyside derby awaits Liverpool as they look to return to the winner’s board on Saturday and inflict the Blues’ first defeat of the season.

The Reds could not have left for the international break in a worse condition having been humbled by an Aston Villa side who piled on seven goals to inflict the first league defeat of the season.

It was a performance devoid of intensity and resilience, characteristics which have become key pillars under the stewardship of Jurgen Klopp.

And while the majority of the team jetted off for international duty, they have each had almost two weeks to stew over the result and plot their way back on track.

Few fixtures are bigger than the Merseyside derby and the occasion provides the ideal backdrop to turn on the heat and ensure Everton feel their wrath.

The matchup at Goodison has not been one defined by goals in recent years with three successive goalless draws, but with each side managing just one clean sheet each in the league to date, that could soon change.

For Liverpool, this meeting is about conjuring up the right response on the way to three points and for the hosts, it’s about maintaining their 100 percent start to the season.

It all sets up an intriguing battle to kickstart a relentless month of fixtures.

Liverpool are in a much better position for the trip to Goodison than they were last time out, with a number of key figures back in contention.

While Alisson remains the notable absentee with a shoulder injury, the Reds have been boosted by the return of Jordan Henderson, Joel Matip, Sadio Mane and Thiago from injury and illness respectively.

With Naby Keita the sole victim from the international break, Klopp has nearly a full complement of midfield players to select as he plots Liverpool’s path back to the winners’ board.

But the No. 8 joins Alex Oxlade-Chamberlain on the sidelines, with the latter still recovering from a knee injury.

It means changes are expected on Saturday, with Thiago in line to make his full debut and the captain back in the swing of things after stepping up his recovery with England.

The pair could join Fabinho in the middle of the park after both he and Roberto Firmino returned earlier than expected from their international exploits, with the No. 3 not seeing a minute of action.

For Everton, Andre Gomes, Allan and Seamus Coleman are all expected to be in the mix after missing their last game against Brighton, while Yerry Mina and Lucas Digne are both under an injury cloud and will continue to be assessed.

Last 5 Away at Everton (All Competitions) 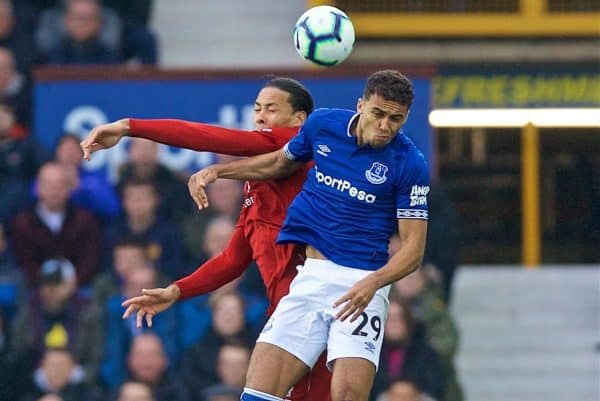 * Game to be played behind-closed-doors

Having clinched a brace last time out, Mohamed Salah is now just one goal away from notching a century for Liverpool.

If he finds the net at Goodison Park, he will become the 17th different player to reach the milestone for the club and the third-fastest to do so behind only Roger Hunt and Jack Parkinson in what would be his 159th game.

Salah has played Everton three times during his time with the Reds and has scored once.

Speaking in his pre-match press conference, Klopp did not hide from the fact that a “proper challenge” awaits his side against an unbeaten Everton outfit:

“You don’t need to be a manager to see [their rise], it’s pretty clear that they did some good business and Carlo is a sensational manager.

“It was always clear when he had the time to build something then he will do that and with the resources and that’s what he did. This team looks really, really good.

“I would like to say something different but it’s not possible. A proper challenge.” 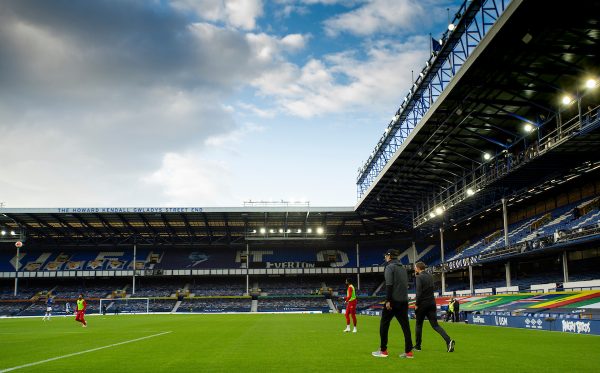 Everton vs. Liverpool will be shown live in the UK on BT Sport 1 and BT Sport Ultimate, with coverage starting at 11.30am (BST) ahead of the 12.30pm kickoff.

Chris Williams will be keeping you informed and up to date with all the action on This Is Anfield’s matchday liveblog, starting from 11.45am (BST).

Who is Jake Cain? The prolific 19-year-old in the Liverpool squad vs. Ajax – Liverpool FC