Liverpool have a right to be angry after the Merseyside derby, but as with the 7-2 at Aston Villa, the fallout of this 2-2 draw to Everton must be turned into a positive.

Football can be a ruthless and unforgiving taskmaster at times. At Goodison Park on Saturday, it was downright malicious.

Liverpool started the game majestically. Sadio Mane was at the business end of a magical early move to plunder the opening goal, and fire a warning to their newly ebullient and Premier League-leading rivals from across Stanley Park.

Within minutes Henderson could, maybe should, have made it two.

As early exchanges go, Liverpool’s show of intent was that they were more than capable of sweeping their hosts aside, with an indecent yet stylish sense of ease.

An immediately concerning sight, our immoveable central defensive object sat on the turf, leg outstretched and waving towards the bench, with the universal footballing hand gesture that this one hurts and it could be a bit serious.

Up got Van Dijk and off he strolled for treatment, his afternoon prematurely over. We can only hope it doesn’t end up being a case of his month, year or even season being over.

Because it’s Van Dijk who got to his feet, to transport himself back to the portacabin on the Park End car park, it gives no real clues as to what damage has been done.

Lesser mortals would have happily accepted the stretcher and gas and air in such circumstances.

Soon came the first equaliser of the day. A thunderous header by Michael Keane, when meeting the ball roughly in an area in which Van Dijk might well have dominated the space. 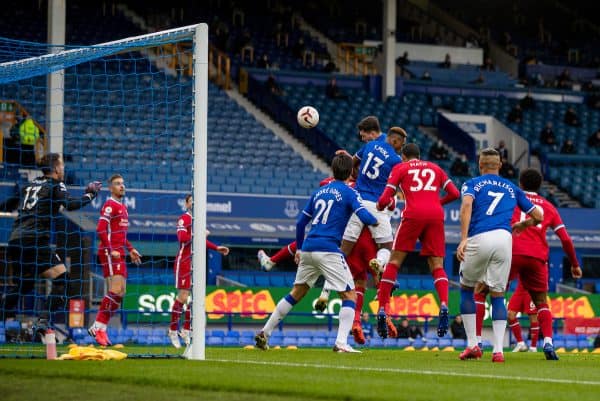 Joe Gomez was selected as Van Dijk’s replacement when Fabinho dropping back would have been another option.

He was almost immediately outjumped by Dominic Calvert-Lewin in an action that should have been stored in the memory banks for later in the game.

Suddenly, here was the test; how do we respond?

No Alisson, and no Van Dijk. So much has been speculated about how Liverpool would cope without the two players deemed to be the bedrock of a side, when the biggest prizes were previously agonisingly out of reach because of goalkeeping and central defensive frailties.

This one was always going to be about confidence.

That was going to be offset by a test on the stress levels of our own confidence, in the wake of having had two weeks to brood on conceding seven at Villa Park.

Over on the other side of Stanley Park, there is a compelling genesis which is threatening to take hold. Carlo Ancelotti knows a thing or two about football and he has strengthened well during the transfer window.

For Everton, it is all about breaking their default settings, it is about eradicating the old weather-worn stereotypes.

The only stereotypical Everton things about Everton now are Duncan Ferguson and Pickford. For Everton, it is all about forgetting how to be ‘typical Everton‘.

In a macrocosm of how Man City could only move forward by unlearning generations of being ‘typical Citeh’, Everton’s aim has to be on relinquishing their old status as ‘typical Everton‘, of being ‘The Ev’.

Ancelotti is a master of reinvention and has an eyebrow raise to die for.

Fear not, though. Despite their litany of improvements, they will reach a plateau for as long as they have Pickford in goal.

There was expansive football, there was nervousness. Everton panicked whenever we drew to within 40 yards of goal.

Allan was a serial offender in giving needless free-kicks away around the penalty area, all the while resisting a yellow card until late on. There was a touch of Joe Allen about it all. Joe Allan perhaps? It was a midfield performance that Lucas would have been proud of.

Liverpool continued to create, with Thiago pulling the strings. A Trent Alexander-Arnold free-kick came close(ish), while another Mane chance went untaken, as part of a magnificent move.

The second half swayed and ebbed. Henderson struck one over the bar. Calvert-Lewin missed a golden opportunity. It was a test of constitution: brood and drop points, or be focused and believe in how if we do the right things, we win.

Richarlison then hit the post from a floated James Rodriguez cross. Adrian arguably had it covered, in an awkward sort of way. It wasn’t to be the last impact Richarlison made on the encounter.

Just as the game was beginning to meander, Salah lashed in a venomous strike for 2-1. One hundred goals scored in a Liverpool shirt, for a player who is simultaneously loved and taken for granted.

Joel Matip then forced a save from Pickford with a fine header. 3-1 would have ended proceedings, yet it wasn’t to be.

A second equaliser came courtesy of a Calvert-Lewin header, which he met at an admirably ridiculous height.

Undeniably a rapidly improving player, he wasn’t the deliverer of the last piece of drama.

Richarlison gained his deserved red card for a hideous advance on Thiago, an incident where the officials seemed to be belatedly getting a handle on the rules of the game.

Be angry. You’ve every right to feel angry about it. Denied not only what should have been our late annual comedy winner in the Merseyside derby, but three deserved points and the perfect way to exorcise the ghosts of Villa Park.

Store the experience and how it feels, hold your breath on Van Dijk and Thiago, and rest assured that Liverpool will turn this angst into a positive.