Jurgen Klopp maintains an interest in Jadon Sancho, and though it is unclear whether a move will materialise, the odds are increased after Man United‘s failed pursuit.

United courted the Borussia Dortmund forward throughout the summer, but as the transfer deadline passed on Thursday night they were unable to bring Sancho to Old Trafford.

Ole Gunnar Solskjaer’s side instead made another panic signing of 33-year-old Edinson Cavani, while securing deals for young wingers Facundo Pellistri and Amad Diallo.

It was a strange end to the window for United, but it was a familiar one for a side still struggling for an identity seven years on from Alex Ferguson’s retirement.

In truth, it never seemed likely that Sancho would swap Dortmund for United, as despite there being few other genuine suitors in a difficult period financially, the 20-year-old is already operating above their level.

Tuesday morning brought a long read on the situation from The Athletic, explaining that United “never got close” despite a 10-week window for talks.

The report explains: “Essentially, United did not believe Dortmund would stay firm on the price-tag of €120 million or their deadline of August 10, embarking on a long-running game of poker without realising that the Bundesliga club weren’t even at the table.”

It is an embarrassing situation for United, as for a club so concerned with PR that sources had claimed they were frustrated with fans vocalising their transfer concerns on Twitter, it presents them as foolish. 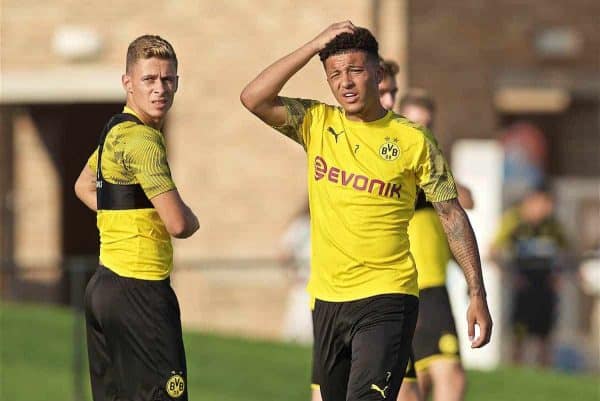 Interestingly, within the report it claims that Klopp has been “keeping abreast” of the situation, and even “told friends he believed the player would end up at Old Trafford.”

While it is projected that any deal could have cost United up to €250 million including the fees paid to Dortmund and Sancho’s agent and the player’s wages over the course of a long-term contract, it is likely that Liverpool will continue to follow his progress.

Sancho’s deal with Dortmund runs until 2023, which ensures that there will be no cut-price exit in the near future, but the England international would be an ideal, top-level candidate were Mohamed Salah to leave, for example.

Klopp has praised the youngster on a number of occasions, saying in June that “the red jersey would look very good on Jadon,” but he also previously stressed how difficult the deal would be for Liverpool.

Nevertheless, with United potentially out of the running, it is a situation that is worth keeping an eye on in the future, as the Reds’ powers in the transfer market are increasing due to their success.

Trades, Allocation Order and more: What to watch for as transfer window closes Thursday | Tom Bogert