Jurgen Klopp speaks animatedly about the power and importance of the Anfield crowd, so how does he replace the irreplaceable amid the fans’ continued absence?

I was reading the new book ‘Jurgen Klopp: Notes On A Season’ this week and a paragraph from his matchday programme notes before the Southampton game in February leapt off the page at me.

“The last fixture here on home soil was Manchester United and without question the energy from the crowd was decisive. It was as if the Kop willed Ali’s ball and Mo’s sprint and finish. I hope that is fresh in the mind of the Liverpool fans today. I hope they know that their contribution is what makes those moments possible.”

How’s that for a bit of modern-day Shankly? Whereas the Klopp you see in press conferences and interviews spends his time answering questions from journalists trying to work their angles, in his official matchday programme notes the Liverpool manager sets the agenda.

So when he used the phrases “the crowd was decisive,” and “their contribution makes those moments possible,” he absolutely meant it. Which is why the government’s latest batch of Covid19 restrictions – lasting six months – announced this week are potentially a big blow to Liverpool’s hopes of success on the pitch. 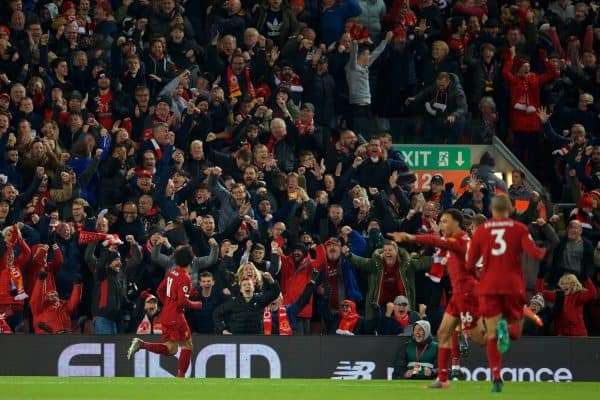 Irrespective of your view on the coronavirus outbreak – and I know someone who is terrified to leave the house and someone else with extreme conspiracy theories involving a Chinese super army – the reality of the situation as it stands is that Anfield will be closed to supporters until mid-March. At the earliest.

Even then, there are likely to be pilot events followed by reduced capacities which, with only four home league games left after the six month period ends, will mean Anfield is highly unlikely to be full at any point this season. Things could change, but it doesn’t look good.

As brilliant as Klopp’s team are at home – and winning 18 and drawing one of their 19 home Premier League games last season was two points short of being as good as it gets – they are going to find life tougher at Anfield this season without their 12th man.

Some people dismiss the idea that crowds can have an influence on the outcome of football matches. Those people are probably flat Earthers, too. A noisy, partisan, passionate crowd has a massive influence on both sets of players and the match officials because a good – or toxic – atmosphere gets into the heads of everyone inside a stadium.

Since Klopp has been in charge, Liverpool have developed a habit of scoring goals in fairly quick succession at Anfield. It started with Sadio Mane‘s two goals in three minutes against Spurs in early 2017 and has happened plenty of times since, particularly on big Champions League nights when Anfield is at its most raucous. 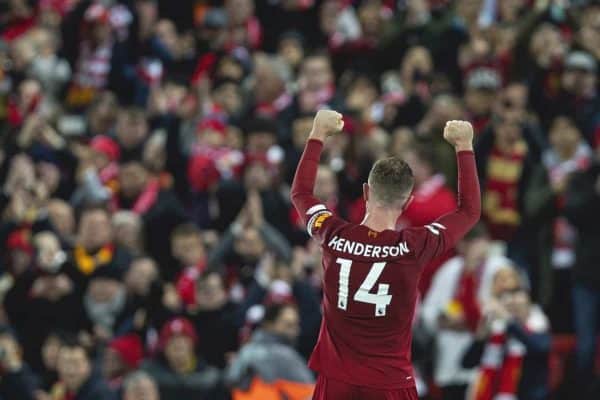 This Liverpool team and the Anfield crowd feed off each other to build momentum. There’s a shared mentality to go for the jugular when a goal up, rather than sit on a lead, and that has been a big factor in the Reds going a whopping 60 home games without defeat in the Premier League, just three games short of equalling the club record of 63 games set between 1978 and 1981.

Keeping that run going for another six months in an empty stadium is going to be a big ask. Even with Thiago conducting the orchestra.

I’ve been to four of Liverpool’s five Anfield games behind closed doors so far. I’m privileged to have been there, but the only way you can come close to recreating how it feels at home is to watch the match alone while wearing a face covering with the fake crowd noise switched off.

At half-time in the Leeds game, stewards even walked around the makeshift press box – which stretches the entire length of the upper Main Stand to maintain social distancing between journalists – to do a face covering check. Any journalist who didn’t have both their mouth and nose covered was reprimanded. Good luck with that when crowds are back in.

It seems to me that visiting teams are increasingly arriving at Anfield with less fear and playing with more freedom. They can hear themselves think, they don’t have the pressure of 50,000+ Reds getting after them and they know not having the Anfield atmosphere willing them on is a psychological blow for Liverpool’s players.

Look at the last three home matches. Burnley needed Nick Pope to stay in the game, but should really have won at Anfield when Johann Gudmundsson smashed a late sitter against the bar. Chelsea came and scored three, so did Leeds United – with both teams also having goals (Chelsea one, Leeds two) disallowed for offside.

Yes, you can look at different defensive circumstances for the seven goals conceded in those three home games, and given the Reds struck 10 goals to take seven points from Burnley, Chelsea (having already won the title) and Leeds then it’s hardly been catastrophic. But it’s a worry.

There will be goals again on Monday night. Liverpool have only kept two clean sheets in the last 23 home games against Arsenal, but have outscored the Gunners 63-45 – a bonkers aggregate scoreline given the last 23 Anfield games against Manchester United stand at 28-18 to the Redmen.

The thing is, this Liverpool team won the Premier League title by digging in to win 14 games (six of them at Anfield) by one goal, not by getting embroiled in a series of goalfests which, eventually, undermines defensive confidence and costs you points.

It makes me feel that Liverpool still really need “the energy from the crowd” to be decisive in big games at Anfield, but won’t have it, which gives Klopp a difficult problem to try to solve.

How does he replace the irreplaceable?

Chris McLoughlin is the senior writer for the Official LFC Matchday Programme and LFC Magazine. You can order both, and ‘Jurgen Klopp: Notes On A Season’, here.

Keita back in the fold & a start for Jota? – Predicting Liverpool’s lineup vs. Sheffield United – Liverpool FC