It was another fantastic weekend for Liverpool’s loanees, with goals, assists and top performances in abundance but there was also a moment of madness.

It’s been an electric start to the season for the borrowed Reds, who were in superb form again across the weekend.

Only one Red missed out, with Loris Karius still absent due to injury.

Here’s what happened across an excellent weekend.

Ojo began the weekend early, with a bang…

Sheyi Ojo sat out of Rangers’ 3-0 win over East Fife in the Scottish League Cup on Sunday as Steven Gerrard made 10 changes.

Those alterations came after a very impressive all-round display as his side sealed a 3-1 victory over FC Midtjylland on Thursday, winning their Europa League third-round qualifier 7-3 on aggregate.

Ojo was one of the stars of that performance, scoring once and laying on two assists before departing to a standing ovation from the Ibrox crowd.

His first assist came peeling off the shoulder of the defender on the left flank, sending a low cross for Alfredo Morelos to turn home, before the Colombian turned provider for the winger in a near-identical situation.

The combination worked to perfection for the third, with Ojo clearly settling in well at Rangers after a difficult campaign on loan with Stade de Reims last time out.

Harry Wilson introduced himself to Bournemouth and the Premier League stage in spectacular style on his first start for his new club.

Wilson took just 12 minutes to make his mark, scoring a stunning strike to help the Cherries claim a first win of the campaign against Aston Villa with a 2-1 victory.

The goal was a trademark Wilson effort: a long-range strike which flew in off the post (via a deflection) to put Bournemouth 2-0 up.

But even more impressive than that was that the Welshman excelled in his all-round play, earning praise from Cherries boss Eddie Howe post-match.

Buzzing to get a debut goal and the 3 points??? great shift from the boys?? thanks for the support!? https://t.co/GuOvE9heOE

Wilson has been tipped for big things this season on the biggest stage. He certainly looks set to deliver.

Grujic went from hero to villain…

It’s been an eventful opening to the new season to say the least for the Serbian midfielder.

Grujic made a great start as he posted an assist in Hertha Berlin’s season-opening win against Hansa in the DFB-Pokal.

But that was followed by a performance which saw him go from hero to zero in his side’s first Bundesliga clash against Bayern Munich which ended 2-2.

Indeed, Grujic made himself a hero when he opened his account for the campaign to give his side a shock 2-1 lead at the Allianz Arena, stunning the home crowd.

It was a brilliant goal—starting with Grujic winning a towering header before latching onto a lob over Bayern’s defence and rounding Manuel Neuer with supreme confidence.

After the break, a moment of madness saw that exquisite work undone.

Despite there being no immediate danger, Grujic needlessly hauled Robert Lewandowski to the ground to concede a silly penalty, which the Polish striker converted for 2-2.

Grujic and his team-mates dug in to earn an excellent point, but a goalscoring and good overall display was marred by a rash moment which cost his side a stunning win.

Another Red posted an assist… 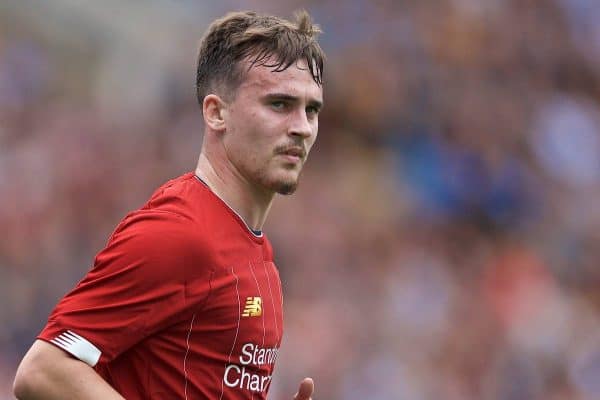 On a weekend for goalscorers, one Red turned provider.

It was Liam Millar, who posted his first assist of the season supplying Kilmarnock’s winner in a 1-0 victory over Hamilton in the Scottish League Cup.

The decisive moment came in extra time—with 113 minutes on the clock—as Millar delivered a good cross from the left which Dom Thomas bundled home.

It was a great impact from the bench from Millar, continuing what has been a bright start to his second spell at Rugby Park.

He will now hope the game-changing contribution earns him a recall to the starting XI.

The four young Reds to feature in the lower leagues were all in positive form.

Ovie Ejaria made his first league start since re-joining Reading against Cardiff.

And he was one of the Royals’ stand-out performers as they cruised to a 3-0 win, earning a standing ovation for his display.

In the same division, Kamil Grabara made a third consecutive Championship start at Huddersfield and impressed despite being unable to prevent his side losing 2-1 to Fulham.

In League One, Ben Woodburn enjoyed another full 90 minutes in Oxford’s 2-1 loss at Blackpool—in which he hit the post as he gets back into the swing of playing regular first-team football.

Rhys Williams continued his strong start at Kidderminster, producing another solid defensive display to keep a second clean sheet which earned a 1-0 win at Curzon Ashton.

Two Reds made appearances from the bench in Germany.

Taiwo Awoniyi kicked off his second spell in the Bundesliga as he made his debut for Mainz 05, featuring as a sub for the closing moments of his side’s opening-day 3-0 loss at Freiburg.

In the division below, Nathaniel Phillips enjoyed a second outing for Stuttgart and made a good impact to help his side find a late winner against St Pauli and see out a 2-1 victory. 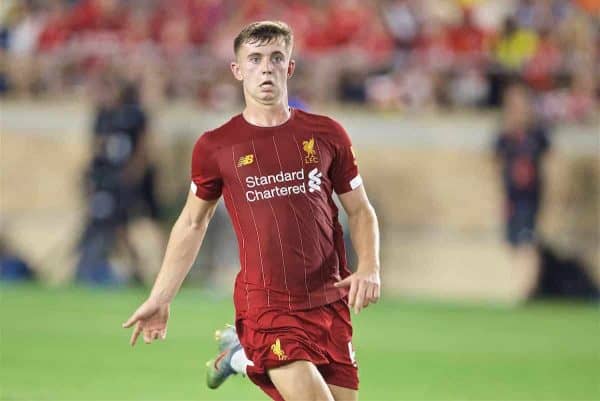 Mason Greenwood is a better finisher than Rashford

Best photos as Liverpool train ahead of Atletico Madrid clash