Diogo Jota made his Liverpool debut in the 7-2 victory over Lincoln in the League Cup, but after a quiet bow, what can fans expect from the club’s fourth-biggest signing?

Only three players in history have moved to Anfield for a higher transfer fee than the deal worth up to £45 million that coaxed Jota from Wolves.

But unlike Naby Keita (£52.75m), Alisson (£65m) and Virgil van Dijk (£75m), it is perhaps fair to say that less is known about Liverpool’s new No. 20, who arrives with a burgeoning reputation but a relatively low profile.

Jurgen Klopp and his staff are convinced of Jota’s ability and potential, with Pep Lijnders describing him as a “pressing monster” who can “fit in straight away,” which should be testament enough.

For a more detailed view of the Portugal international, however, the opinion of a journalist who followed him week in, week out over three years with Wolves, and worked directly with the player himself, is certainly valuable.

So to get more of an impression of the player Liverpool have signed in Diogo Jota, This Is Anfield spoke to The Athletic’s Wolves reporter Tim Spiers (@TimSpiers).

What kind of player is Jota? What are his strengths and weaknesses?

What first struck me about Jota when he joined three years ago was how direct he was. Head down, ball close to feet, a one-track mind to force his way into the box and get a shot away. He’s not one to blast it into row Z – he aims low and for the corner.

He’s a manager’s dream in that he’ll run all day long and press the hell out of defences.

At first Jota was pushed around in the Championship, he’d bitch and squeal whenever he was fouled, but he soon toughened up and despite his slight frame he’s pretty strong and able to shrug off defenders.

Witness the seminal goal of the Nuno era when he left Luke Shaw on his backside, running from halfway to stick one in the corner against Manchester United in an FA Cup quarter final, for the perfect example of this – a truly goosebump-inducing moment for any Wolves fan.

He’s two-footed, adept at linking with team-mates with little one-twos etc. and has a fantastic ability to pretty much instantly get a team 40 yards upfield with a quick dart of pace and close control.

His goal record is good but it comes in fits and starts; he’s been incredibly streaky, particularly last season when he’d score five in two games (or a hat-trick in 11 minutes against Besiktas) but then not score for two months.

It’s a confidence and consistency issue and one that I’d expect Jurgen Klopp to solve.

His assist record (just one in the league last season) is poor but some of that was down to Wolves focusing their attacks via Adama Traore.

Where is he best on the pitch, and which other roles could he play? 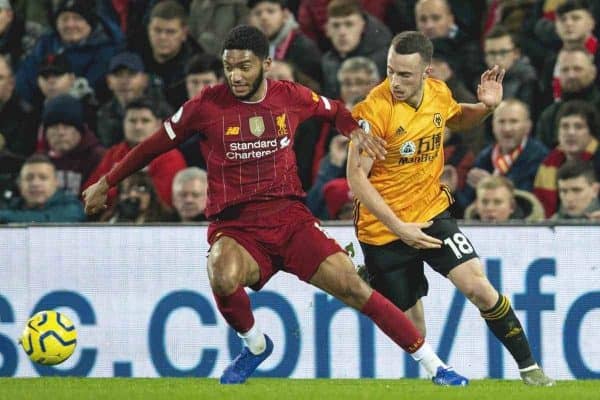 Most of his Wolves appearances over the three years came wide left in a three. In the Championship this wasn’t a problem for a player of Jota’s quality, but in the Premier League he’s definitely been more effective in a two.

He prefers playing centrally and has stated as such many times.

He forming a telepathic relationship with Raul Jimenez, with a stunning breakaway goal at Stamford Bridge in March 2019 when they sliced through the middle of the Chelsea defence proving this.

Being wide left doesn’t suit him quite as well, he’s not a byline winger and hasn’t got blistering acceleration one-v-one, but he’s adaptable, young and hardworking enough to fit any role in the front three.

He’s been compared to Sadio Mane before he joined Liverpool – would you agree?

On his day Jota was the best forward Wolves had, even better than Traore due to his wider-ranging skill-set.

I’d completely agree with that assessment, any Wolves fan will tell you that Jota has the potential to be a superstar.

A lot of it is down to confidence (he always seems to perform well when he’s been written off after a goal drought) and to be honest, as Nuno suggested, he probably hit a ceiling at Wolves.

Nuno believes Klopp can get the best out of Jota and take him to the next level, which again I’d agree with.

If those scoring streaks he goes on are stretched out over a season you’re talking about a 25/30-goal player.

How ready would you say he is to come in and perform at the highest level?

When he’s feeling good and in form, Jota is courageous and fearless and has performed well in big games for Wolves, which bodes well for Liverpool.

I think back to two huge games, the aforementioned FA Cup quarter-final against United when he scored that wonderful goal and then the semi-final against Watford at Wembley when he was Wolves’ best player (they basically lost the game when he was taken off).

Big games don’t faze him, he’s a Portugal international now and has played in the Champions League (for Porto), the Europa League and big league and domestic cup matches.

Finally, do you think he has the character to succeed at a club like Liverpool? 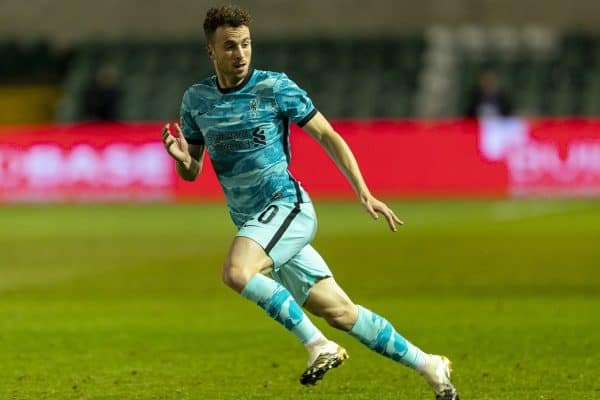 Well, first of all he’s a lovely lad, not the noisiest in the dressing room but quietly determined.

He’s also absolutely obsessed with football – when he’s not playing it, or watching it, he’s playing FIFA (people may remember he won the Premier League FIFA tournament during lockdown, beating Trent Alexander-Arnold in the final) or Football Manager.

I interviewed him about the latter in the summer because it’s a fixation for him, he loves taking non-league teams all the way to Europe (he’s won the Europa League with Telford).

As with most of Wolves’ players he’s professional, grounded and comes across as humble (he’s with his childhood sweetheart and they’re expecting their first child next year).

He’s a student of the game, he’ll be well aware of Liverpool’s history and what the club means to the city.

If he can iron out those inconsistencies I have no doubts he’ll be a star at Anfield.

* Many thanks to Tim Spiers for his insight into Jota, follow him on Twitter and on The Athletic.