Liverpool are back in Premier League action at Aston Villa, where Jurgen Klopp has been forced to make a change in goal and in attack – with Adrian taking over between the sticks.

After a much-changed XI succumbed to a penalty shoot-out defeat last time out in the League Cup, it is now straight back to focusing on the Premier League in the final fixture before the October international break.

A strong XI will be restored at Villa Park, but Klopp has been restricted in his selection by injury and cases of COVID-19, with both Sadio Mane and Thiago self-isolating after testing positive.

Jordan Henderson made his return to training on Friday after missing Liverpool’s last three games with a thigh injury and takes a place on the bench today.

The Reds are out to make it four from four to start the 2020/21 season but will be without Alisson for the clash due to a shoulder injury picked up in training, with Adrian to retain his place from mid-week for his third start of the season.

A back four of Trent Alexander-Arnold, Joe Gomez, Virgil van Dijk and Andy Robertson will sit ahead of the Spaniard.

In the middle of the park, Fabinho remains in place in the No. 6 role and is joined by Gini Wijnaldum and Naby Keita.

And the attacking trident has been forced into a change, with Diogo Jota slotting in on the left for his league bow for the club alongside Mohamed Salah, who is on the hunt for his 100th goal in English football, and Roberto Firmino.

The boss has the likes of James Milner, Takumi Minamino and Divock Origi to turn to from the substitutes bench. 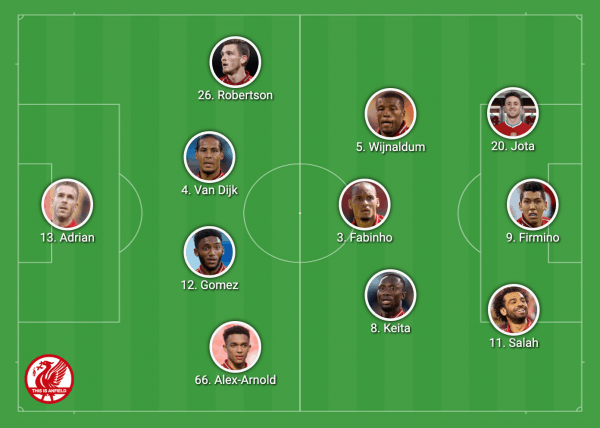