Liverpool’s relentless fixture schedule continues as Wolves make the trip to Anfield on Sunday, where a number of changes could be on the cards.

Despite having missed a round of Premier League action to be crowned world champions, Jurgen Klopp‘s Reds find themselves with a commanding 13 point lead atop of the table with a game in hand.

Liverpool’s emphatic 4-0 win at Leicester ensured the Foxes were unable to make up any ground, while Man City‘s defeat at the hands of Wolves meant they remain 14 points adrift.

And the last game of the calendar year provides yet another opportunity for the Reds to flex their muscles and, at the very least, maintain their double-digit advantage.

With a taxing two-week period under their belt and more games on the horizon, the manager could once again look to rotate his side to inject fresh legs as the games continue to come Liverpool’s way.

Here’s how the Reds could lineup at Anfield on Sunday afternoon.

After a series of injuries in recent times, the Reds were able to escape the King Power without further damage.

While Jordan Henderson was forced from the field after a nasty kick to his shin, the skipper is set to be fit and available for Wolves’ visit.

However, after playing 382 out of a possible 390 minutes from the Reds’ last four matches, Henderson could be rotated out of the side to ensure he keeps ticking over and is primed for Sheffield United’s visit on January 2.

With Fabinho and Alex Oxlade-Chamberlain remaining on the sidelines, alongside Dejan Lovren and Joel Matip, Klopp could look to James Milner or Adam Lallana in the middle of the park having conceded “fresh legs” are likely to be on the agenda.

Gini Wijnaldum and Naby Keita remain as other options, while a change in systems could also present Liverpool with a chance to introduce Xherdan Shaqiri.

With limited options to make changes at the back, Klopp could look to keep his defensive quintet together from the start once more.

Trent Alexander-Arnold will head into the clash off the back of his most complete performance of his burgeoning career against Leicester, and with confidence and momentum aplenty it would seem counter-productive to switch him out this time around.

Andy Robertson and Virgil van Dijk will find themselves with the task of keeping Adama Traore quiet, with Joe Gomez and Alisson completing the defensive line.

In midfield, Henderson would drop out and Wijnaldum would occupy the No. 6 role, with Naby Keita given the nod as he looks to continue his rich vein of form and help disrupt the visitors who could look to make a number of changes themselves after playing twice in less than 48 hours.

James Milner is likely to be the preferred option to sit alongside the pair, while Shaqiri would be introduced into the forward line in the only other change from Liverpool’s last outing.

The Swiss international would lead the line alongside Sadio Mane and Roberto Firmino, with Mohamed Salah handed a timely respite, a forward line which is more than capable of causing the Wolves defence all sort of trouble: 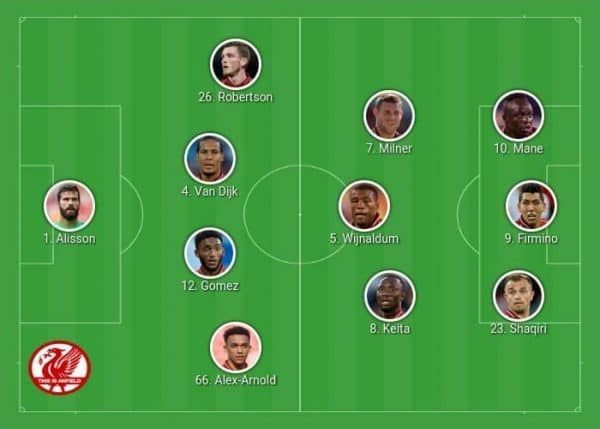 Alternatively, the boss could look to make a handful of changes, with a switch-up in every department and a change in systems to a 4-2-3-1.

It would see Robertson be the sole change in defence with a move to the bench, with Milner taking up his position at left-back, ensuring the former is the first of the full-backs to be rotated ahead of a flurry of games after the turn of the new year.

Wijnaldum and Lallana would then act as the double-pivot, handing Keita a timely break after making three successive starts for the Reds.

The switch-up in formation would allow fresh legs in attack, with Shaqiri being deployed alongside Firmino and Mane in place of Salah, with Divock Origi the man to lead the line: 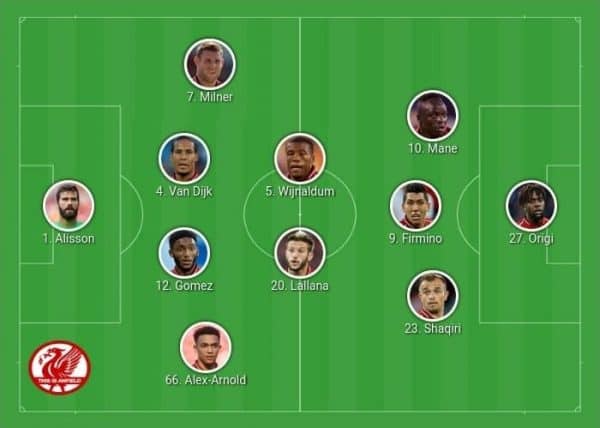 While Wolves are no doubt a threat, it would not come as a surprise to see the boss look to utilise his squad as he looks to keep the team ticking over in every department.

The flexibility and fluidity the Reds have will no doubt keep Wolves guessing and on their toes as Klopp’s men have proven despite sweeping changes to the starting XI they are all capable of getting the job done and finishing 2019 on a high.

Galliani: 'Zlatan pins you to the wall'